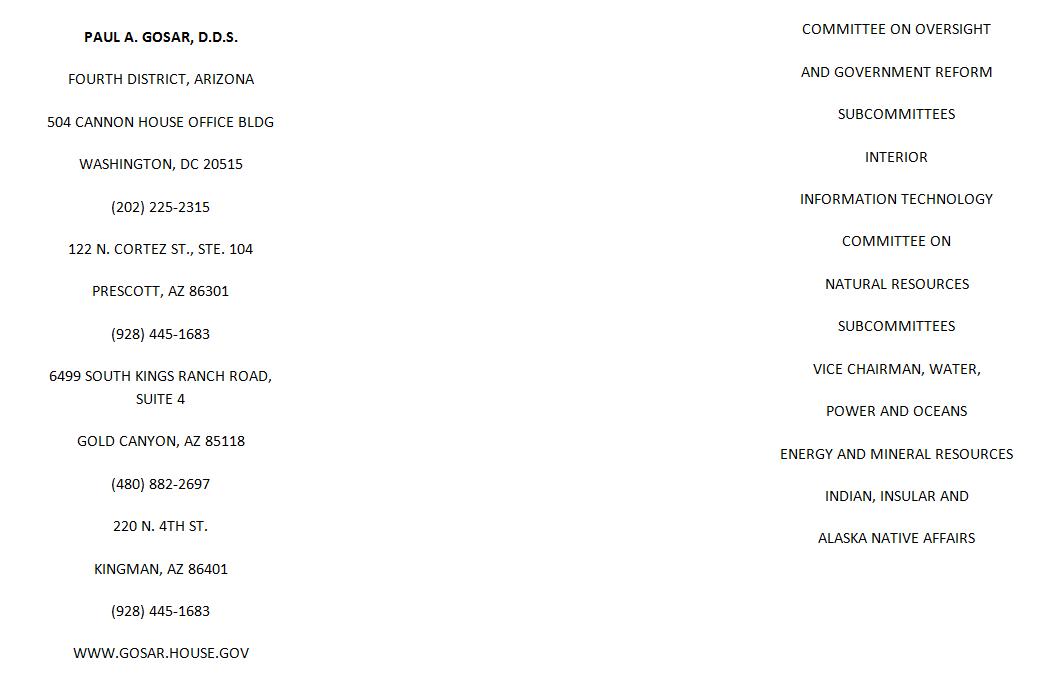 Dear Ms. Talbert,
Thank you for contacting me about the proposed Sedona Verde Valley Red Rock National Monument. I appreciate your thoughts on this issue and welcome the opportunity to respond.
First and foremost, I strongly oppose any effort that seeks to have the proposed 160,000 acres of Sedona/Verde Valley land designated as a National Monument under the Antiquities Act. President Obama has exceeded the intent of this law and abused the Antiquities Act more than any other president in the history of this country. To date, he has designated or expanded 19 national monuments. These designations have locked up more than 1.25 million acres of land. Arizona already has 18 national monuments, more than any other state. Only 18.2% of Arizona land is private land and the federal government already controls more than 30 million acres of land in our state.
Unilateral designations that circumvent Congress typically result in devastating consequences for rural Arizona and our state’s future economic prosperity. For every new acre claimed for the federal government, there is an acre of private land lost. Such actions exacerbate challenges for our local communities to fund things like education as lands that are added to the federal rolls can no longer be taxed. National monument designations can also significantly harm hunting, fishing, OHV and other recreational activities. These declarations typically result in restrictive land-use designations and regulations. Furthermore, national monument designations under the Antiquities Act typically have significant consequences that negatively impact grazing rights, water rights, wildfire prevention and other land management activities.
Designations under the Antiquities Act also don’t have to follow the environmental process required under NEPA and aren’t required to solicit public input prior to declaration. I could go on and on about why the Antiquities Act is so bad for our communities and why I have been fighting so hard to reform it. Last Congress I introduced the Arizona Land Sovereignty Act which sought to prohibit National Monument designations in Arizona without express consent of Congress. Any effort that seeks to designate 160,000 acres of Sedona/Verde Valley land as a National Monument should go through Congress. Having said that, I have significant concerns about this proposed National Monument and would not support its passage.
For generations, Arizonans have enjoyed responsible, multiple-use recreation on these public lands, and have been active participants in conserving this amazing public resource. Efforts in managing this pristine area are currently being handled appropriately, and locking up even more land would be a step backwards. The proposed monument designation would erode the extensive cooperation and success that federal and state agencies in Arizona have achieved to date.
At a time when the National Park Service, which is one of the federal agencies responsible for managing our national monuments, is already struggling with an annual budget shortfall, why would we burden them with new responsibilities? In July, the House passed my amendment to prohibit public land management agencies from carrying out declarations under the Antiquities Act in counties where there is significant local opposition and blocked the proposed Grand Canyon Watershed National Monument. I have heard from a considerable amount of people since that time who are opposed to the potential designation for Sedona/Verde Valley. If this misguided proposal moves forward then I will likely attempt to block it as well. Rest assured that my colleagues and I will also continue to take steps to rein in the President’s overreach and abuse of the Antiquities Act.
Again, I appreciate your thoughts and concerns. It is a pleasure to serve Arizona as part of its congressional delegation. Your suggestions are always welcome, and if ever I may be of assistance, please do not hesitate to contact me. To receive the latest legislative updates and news you can sign up for my e-newsletter by visiting www.gosar.house.gov.
Sincerely,