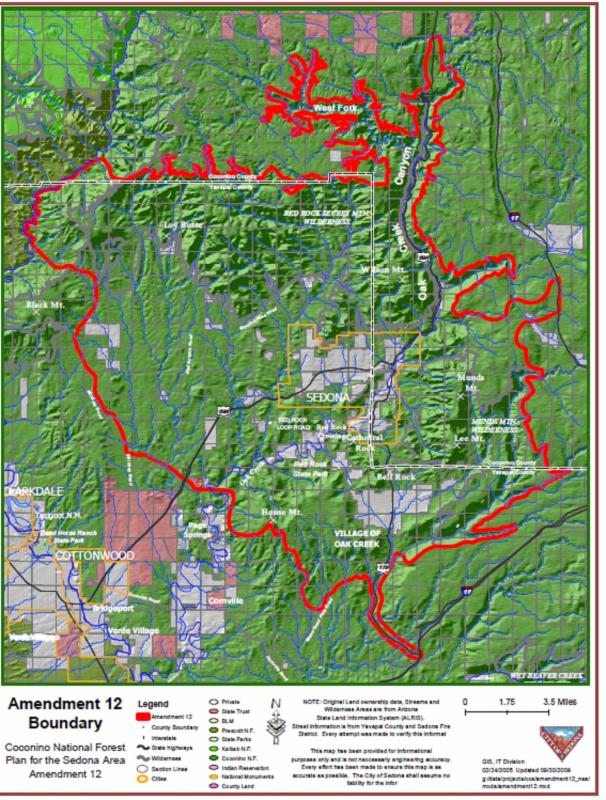 In our research, we have found no other national monument that includes cities, towns and large tracts of private land within its boundaries.

This map, produced by City of Sedona, shows the Amendment 12 forest service boundary in red.  This is also the boundary of the proposed Sedona Verde Valley Red Rock Monument by Keep Sedona Beautiful.

We, the public, do no know what the final boundary will be in the KSB proposal.  Statements were made by KSB at their recent meetings that they were looking at adding areas of the upper Verde River and Beaver Creek areas east of I-17.

The bright red lands are state lands:  notice the large block of state land may be annexed into the city of Cottonwood city limits.

The grey-pink areas are private lands. Note the almost solid block of original pioneer homesteads along Oak Creek south and east of Sedona.

The dark purple line defines the 3 large wilderness areas on north and east sides of the planning area.  There are about 80,000 acres of Wilderness included in the Amendment 12 planning boundary.  Development is not allowed in Wilderness areas.

I do not see detailed analysis by KSB as to why all of these diverse areas are suitable for inclusion within a national monument.

** A detailed scenic analysis has not been done for the Amendment 12 area.  The forest service has specialists who do intricate modeling on a scale of 1 – 5 under the Scenery Management System.  A detailed analysis scenic and other factors would guide designation of such boundaries.

Coconino Forest is managed according to the forest plan by authority of the National Forest Management Act.  Site-specific actions that are not in compliance with the forest plan require a public process with detailed environmental analysis.

About 30% of national monuments have been converted to national parks.

In our research, we have found no other large national monument proposed based on geologic factors that includes cities, towns and large tracts of private land in its boundaries.